Big Nate: Back to Back Hits: On a Roll and Goes for Broke (Paperback) 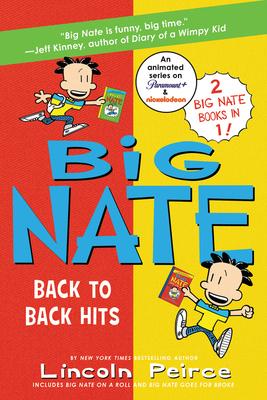 Soon to be an animated series from Nickelodeon!

A new paperback bind-up of the third and fourth novels in the New York Times bestselling Big Nate series: Big Nate on a Roll and Big Nate Goes for Broke.

In Big Nate on a Roll, Nate’s a big deal in his scout troop . . . until Artur—aka Mr. Perfect—joins up. Now Nate’s stuck in second place. Can he make his way back to the top?

For fans of the hilarious Diary of a Wimpy Kid series: Get ready for more Big Nate, #1 doodler and definitely NOT the teacher’s pet.

Lincoln Peirce (pronounced "purse") is a cartoonist/writer and New York Times bestselling author of the hilarious Big Nate book series (www.bignatebooks.com), now published in twenty-five countries worldwide and available as ebooks and audiobooks and as an app, Big Nate: Comix by U! He is also the creator of the comic strip Big Nate. It appears in over three hundred U.S. newspapers and online daily at www.gocomics.com/bignate. Lincoln's boyhood idol was Charles Schulz of Peanuts fame, but his main inspiration for Big Nate has always been his own experience as a sixth grader. Just like Nate, Lincoln loves comics, ice hockey, and Cheez Doodles (and dislikes cats, figure skating, and egg salad). His Big Nate books have been featured on Good Morning America and in the Boston Globe, the Los Angeles Times, USA Today, and the Washington Post. He has also written for Cartoon Network and Nickelodeon. Lincoln lives with his wife and two children in Portland, Maine.