Mastering the Art of Soviet Cooking: A Memoir of Food and Longing (Paperback) 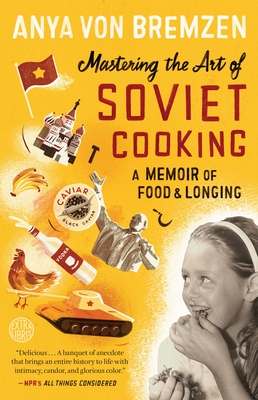 “Delicious . . . A banquet of anecdote that brings history to life with intimacy, candor, and glorious color.”—NPR’s All Things Considered

Born in 1963, in an era of bread shortages, Anya grew up in a communal Moscow apartment where eighteen families shared one kitchen. She sang odes to Lenin, black-marketeered Juicy Fruit gum at school, watched her father brew moonshine, and, like most Soviet citizens, longed for a taste of the mythical West. It was a life by turns absurd, naively joyous, and melancholy—and ultimately intolerable to her anti-Soviet mother, Larisa. When Anya was ten, she and Larisa fled the political repression of Brezhnev-era Russia, arriving in Philadelphia with no winter coats and no right of return.
Now Anya occupies two parallel food universes: one where she writes about four-star restaurants, the other where a taste of humble kolbasa transports her back to her scarlet-blazed socialist past. To bring that past to life, Anya and her mother decide to eat and cook their way through every decade of the Soviet experience. Through these meals, and through the tales of three generations of her family, Anya tells the intimate yet epic story of life in the USSR. Wildly inventive and slyly witty, Mastering the Art of Soviet Cooking is that rare book that stirs our souls and our senses.

ONE OF THE BEST BOOKS OF THE YEAR: The Christian Science Monitor, Publishers Weekly

Anya von Bremzen is one of the most accomplished food writers of her generation: the winner of three James Beard awards; a contributing editor at Travel + Leisure magazine; the author of six acclaimed cookbooks, among them The New Spanish Table, The Greatest Dishes: Around the World in 80 Recipes, and Please to the Table: The Russian Cookbook (coauthored by John Welchman); and the author of two other works of nonfiction, including the forthcoming National Dish. She also contributes regularly to Food & Wine and Saveur and has written for The New Yorker, Departures, and the Los Angeles Times. She divides her time between New York City and Istanbul.

“Delightful . . . The culinary memoir has lately evolved into a genre of its own, what is now known as a ‘oodoir.’ But Anya von Bremzen is a better writer than most of the genre’s practitioners, as this delectable book, which tells the story of postrevolutionary Russia through the prism of one family's meals, amply demonstrates. . . . Von Bremzen moves artfully between historical longshots and intimate details.”—The New York Times Book Review

“Von Bremzen ladles out a rich, zesty history of family life in the USSR conveyed through food and meals.”—Entertainment Weekly

“Beautifully told . . . Mastering the Art of Soviet Cooking turns a bittersweet eye and an intelligent heart on Soviet history through food.”—Los Angeles Times

“Von Bremzen knows how to tell a story—poignant, funny, but never lacking.”—Chicago Tribune

“An ambitious food memoir that is also a meticulously researched history of the Soviet Union. . . . A meditation on culinary nostalgia.”—Julia Moskin, The New York Times

“Breathtaking . . . Mastering the Art of Soviet Cooking is a painstakingly researched and beautifully written cultural history but also the best kind of memoir: one with a self-aware narrator who has mastered the art of not taking herself entirely seriously.”—Masha Gessen, New York Review of Books

“At once harrowing and funny as hell, an epic history told through kotleti (Soviet hamburgers) and contraband Coca-Cola.”—James Oseland, Saveur

“There is no book quite like Mastering the Art of Soviet Cooking. . . . Through all of this lovely and moving memoir's good humor, bittersweet reminiscences, and gorgeous evocations of food, there hangs the 'toska,' the Russian nostalgic 'ache,' of Anya and Larisa's conflicted feelings about the past.”—The Christian Science Monitor

“A masterful telling of Soviet history through the eyes of a cook . . . a collection of fantastic stories that you hear only when sitting on a bar stool or in a church pew. Von Bremzen offers remarkable—and personal—insight about the Cold War, its politics, military strategy and the human suffering that accompanied it.”—Minnapolis Star-Tribune

“Moving . . . funny . . . fascinating . . . Soul-stirring for any emigrant to read, Mastering the Art of Soviet Cooking is a beautifully written tale of heartbreak and ultimately happiness.”—Epicurious

“I don’t think there’s ever been a book quite like this; I couldn’t put it down. Warm, smart and completely engaging, this food-forward journey through Soviet history could only have been written by someone who was there. Part memoir, part cookbook, part social history, this gripping account of Anya von Bremzen’s relationship with the country she fled as a young girl is also an unsentimental, but deeply loving tribute to her mother. Unique and remarkable, this is a book you won't forget.”—Ruth Reichl, author of Tender at the Bone

“Anya's description of the saltiness in vobla is as poignant and image-filled as her reflection on a life that started out one way, but ended up in a better place by chance and fate. Her experience of growing up a child of two different worlds tells the beautiful tale of so many American immigrants.”—Marcus Samuelsson, chef-founder, Red Rooster Harlem, and author of Yes, Chef

“Anya von Bremzen describes the foods of her past powerfully, poetically, and with a wicked sense of humor. Anyone can make a fancy layer cake sound delicious. To invoke an entire culture and era through an intimate story about a salad or soup—that’s taking food writing to a whole different level.”—David Chang, chef-founder, Momofuku