How to Speak Midwestern (Paperback) 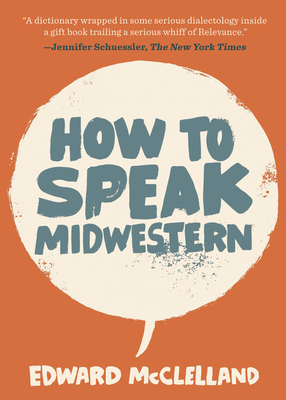 Pittsburgh toilet, squeaky cheese, city chicken, shampoo banana, and Chevy in the Hole are all phrases that are familiar to Midwesterners but sound foreign to anyone living outside the region. This book explains not only what Midwesterners say but also how and why they say it and covers such topics as: the causes of the Northern cities vowel shift, why the accents in Fargo miss the nasality that’s a hallmark of Minnesota speech, and why Chicagoans talk more like people from Buffalo than their next-door neighbors in Wisconsin. Readers from the Midwest will have a better understanding of why they talk the way they do, and readers who are not from the Midwest will know exactly what to say the next time someone ends a sentence with ”eh?”.

Edward McClelland is a journalist. His writing has appeared in publications such as the Columbia Journalism Review, Los Angeles Times, New York Times, and Salon. He is the author of Nothin’ But Blue Skies and Young Mr. Obama. He lives in Chicago.

“A dictionary wrapped in some serious dialectology inside a gift book trailing a serious whiff of Relevance.”  — New York Times

“A delightful romp through the dialects and vocabulary of the region.”  — Lansing City Pulse

"In his delightful new book, Edward McClelland argues that the dialect of the Midwest is one of the country’s most linguistically significant ... [How To Speak Midwestern is] a long-overdue study of the middle-American vernacular, and how that vernacular informs our identity. At its heaviest, the book is a socio-economic treatise worthy of a university library; at its lightest, it’s a regionally specific Urban Dictionary."  — Inside Hook

"There is scholarship [in How To Speak Midwestern], a deep understanding of grammar and ethnic history, as he traces certain speech patterns down to a single city. But McClelland, a Michigan native, also has a voice, opinions and a few punchlines."  — Star Tribune

"McClelland leavens his writing with pop-culture references ... and touches of humor."  — Milwaukee Journal-Sentinal

"How To Speak Midwestern is a fascinating read, whether you hail from WOWOland, the UP, Cereal City, or Baja Minnesota."  — Chicagoist

"An amusing glossary to the lingo of the [Midwest's] more industrial states."  — Washington Post

"McClelland shows us that by embracing our local phrases and accents (and even being able to poke a little fun at them), we cultivate the uniqueness of our cities, grow closer to our communities, and define our cultural identities."  — Third Coast Review