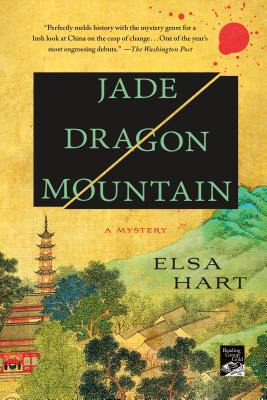 “Hart has written an excellent historical whodunit set in a remote province of Imperial China in 1708. Li Du, a librarian in exile, investigates the murder of an old Jesuit priest a few days before the arrival of the emperor. Full of mythological, cultural, and historical details, Jade Dragon Mountain also offers a fascinating analysis of the period when foreign businessmen began coveting China's riches, in particular its tea. The plot is tight, the characters and suspects are fully developed, and the story keeps readers guessing with a few extra surprises at the end. I highly recommend this book and I am looking forward to reading more adventures featuring Li Du.”
— Pierre Camy (W), Schuler Books & Music, Grand Rapids, MI

On the mountainous border of China and Tibet in 1708, a detective must learn what a killer already knows: that empires' rise and fall on the strength of the stories they tell.

Li Du was an imperial librarian. Now, he is an exile. Arriving in Dayan, the last Chinese town before the Tibetan border, he is surprised to find it teeming with travelers, soldiers, and merchants. All have come for a spectacle unprecedented in this remote province: an eclipse of the sun commanded by the Emperor himself.

When a Jesuit astronomer is found murdered in the home of the local magistrate, blame is hastily placed on Tibetan bandits. But Li Du suspects this was no random killing. Everyone has secrets: the ambitious magistrate, the powerful consort, the bitter servant, the irreproachable secretary, the East India Company merchant, the nervous missionary, and the traveling storyteller who can't keep his own story straight.

Beyond the sloping roofs and festival banners, Li Du can see the mountain pass that will take him out of China forever. He must choose whether to leave and embrace his exile, or to stay and investigate a murder that the town of Dayan seems all too willing to forget.

Elsa Hart is the author of several acclaimed mystery novels set in eighteenth-century China, including City of Ink, one of Publishers Weekly’s Best Books of 2018.

She was born in Rome, but her earliest memories are of Moscow, where her family lived until 1991. Since then she has lived in the Czech Republic, the U.S.A., and China. She earned a B.A. from Swarthmore College and a J.D. from Washington University in St. Louis School of Law.