A Watershed Year: Anatomy of the Iowa Floods of 2008 (Bur Oak Book) (Paperback) 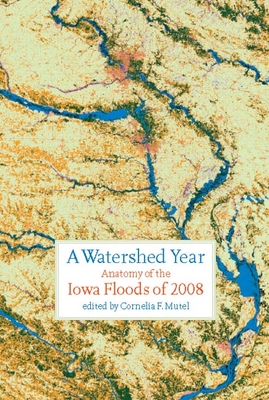 In June 2008, the rivers of eastern Iowa rose above their banks to create floods of epic proportions; their amazing size—flowing in places at a rate nearly double that of the previous record flood—and the rapidity of their rise ruined farmlands and displaced thousands of residents and hundreds of businesses. In Cedar Rapids, the waters inundated more than nine square miles of the downtown area; in Iowa City, where the flood was also the most destructive in history, the University of Iowa’s arts campus was destroyed. By providing a solid base of scientific and technical information presented with unusual clarity and a wealth of supporting illustrations, the contributors to this far-reaching book, many of whom dealt firsthand with the 2008 floods, provide a detailed roadmap of the causes and effects of future devastating floods.

The twenty-five essays fall naturally into four sections. “Rising Rivers, Spreading Waters” begins by comparing the 2008 floods with the midwestern floods of 1993, moves on to trace community responses to the 2008 floods, and ends by illuminating techniques for forecasting floods and determining their size and frequency. “Why Here, Why Now?” searches for possible causes of the 2008 floods and of flooding in general: annual crops and urban landscapes, inflows into and releases from reservoirs, and climate change. “Flood Damages, Flood Costs, Flood Benefits” considers the complex mix of flood costs and effects, emphasizing damages to cities and farmlands as well as potential benefits to natural communities and archaeological sites. “Looking Back, Looking Forward” lays out approaches to managing the floods of the future that are sure to come.

While the book draws most of its examples from one particular region, it explains flooding throughout a much larger region—the midwestern Corn Belt—and thus its sobering yet energizing lessons apply well beyond eastern Iowa. By examining the relationships among rivers, floodplains, weather, and modern society; by stressing matters of science and fact rather than social or policy issues; and by addressing multiple environmental problems and benefits, A Watershed Year informs and educates all those who experienced the 2008 floods and all those concerned with the larger causes of flooding.

Ecologist Cornelia Mutel is the historian and archivist for IIHR-Hydroscience and Engineering at the University of Iowa College of Engineering. She is the author of Fragile Giants: A Natural History of the Loess Hills (Iowa, 1989) and The Emerald Horizon: The History of Nature in Iowa (Iowa, 2008) and coeditor of Land of the Fragile Giants: Landscapes, Environments, and Peoples of the Loess Hills (Iowa, 1994) and The Tallgrass Restoration Handbook for Prairies, Savannas, and Woodlands.

“A Watershed Year captures the essence of the 2008 eastern Iowa floods in essays written by leading scientists, watershed specialists, and public administrators, many of whom experienced the devastation of the flooding firsthand. It is a must read for both those trying to better understand the circumstances resulting in the historic 2008 floods and those involved in mitigation and planning efforts to deal with future floods. In AWatershed Year Connie Mutel challenges each of us to consider how we should learn to live with floods with a more holistic, sustainable watershed approach.”— Larry J. Weber, director, IIHR-Hydroscience and Engineering, University of Iowa

“A Watershed Year reminds us that floods, both large and small, will inevitably happen again in the future—perhaps with even greater frequency because of our changing climate. It does a great service to the people of Iowa by collecting concise, informed recommendations to help individuals, communities, and the state say ‘never again’ to the devastation we experienced in the floods of 2008.”—State Senator Rob Hogg