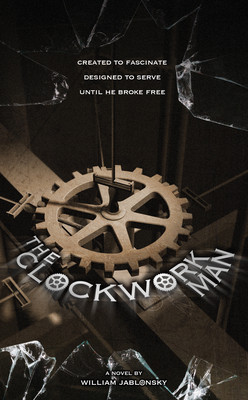 By William Jablonsky
Email or call for price
Special Order

Ernst's world is one of endless admirers, including foreign dignitaries and heads of state. Hailed as a marvel of late nineteenth-century automation, he is the crowning achievement of his master, Karl Gruber. A world-famous builder of automated clocks, Gruber has reached the pinnacle of his art in Ernst--a man constructed entirely of clockwork. Educated and raised in the Gruber household to be a gentle, caring soul, Ernst begins to discover a profound love for his master's daughter, Giselle. Just as their relationship becomes intimate, however, tragedy strikes and the family falls apart. Ernst's serene and happy existence is shattered and changed forever. Abandoned, knowing no other life but the one he has led, Ernst allows himself to wind down in a kind of suicide. Over one hundred years later, he awakens in a strange new land, the world he's known long gone. Along with his mentor and guide, a well-meaning if slightly unstable homeless man, Ernst attempts to piece together the events that brought him to his new home--and to let go of the century-old tragedy that still haunts him.

William Jablonsky is a professor of fiction writing at Loras College. His stories have appeared in "Beloit Fiction Journal," "Florida Review," "Phoebe," and "Southern Humanities Review," and he is the author of "The Indestructible Man." He lives in Dubuque, Iowa.